We’ve all heard the stereotype of the crazy cat person (usually lady) who really, really likes cats. So much so, that this person has a house teeming with felines, fur, and foul fish-flavored scent of cat food. It’s easy to tease friends for being at risk of becoming  “crazy cat people”. But what if these people were under a form of mind control, hypnotized into an uncontrollable attraction to cats? This question has been the topic of much speculation and research in the last 20 years, all centered around the main suspect: the parasite Toxoplasma gondii.

Toxoplasma gondii, (“Toxo” for short) is a eukaryotic parasite suspected of being responsible for an irrational love of cats, as well as the disease toxoplasmosis. These oddly-specific symptoms arise from the fact that felids are the main “definitive” hosts for Toxo, meaning that this organism absolutely must enter a cat during its lifecycle in order to reproduce [1]. Once they reproduce within the cat’s digestive system, Toxo parasites spread through eggs shed in the cat’s poop. From the contaminated soil (or litter box), Toxo spreads to its reservoir hosts, which include prey animals like rodents and birds [1]. Other creatures than these “intended” prey can contract Toxo, though, including humans (and sadly, sea otters)[2]. 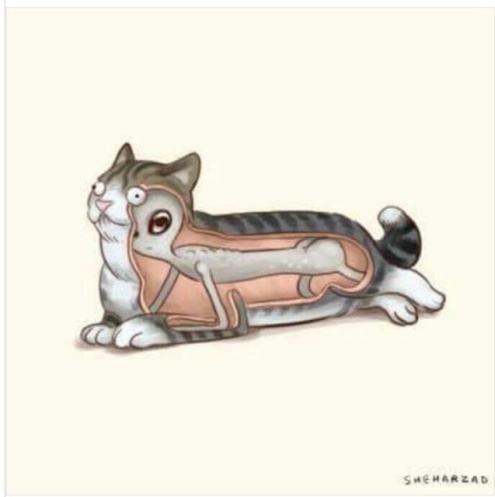 Your cat is not who you think it is. [Source] 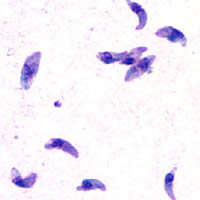 Replace “alien” in the left with parasitic microbe. [Source]

In these reservoir animals, Toxo reproduces asexually, spreading through the body. Toxo tunnels through the intestinal wall with ease, then hitches a ride with circulating immune cells that have VIP access to the brain [3]. Most cells and proteins in blood cannot access the brain due to tight security in the form of the blood-brain barrier, but Toxo sneaks in with the immune cells. Once in the brain, Toxo forms cysts of multiple parasite cells in neurons and other brain cells [3]. In healthy individuals, the immune system quickly takes note and begins producing antibodies to attack Toxo and keep its levels under control. Most affected individuals do not experience symptoms beyond something flu-like [3]. Immuno-compromised individuals, like young babies and the elderly, may develop more severe symptoms that may affect cognitive function, memory, and vision [3].  For this reason, pregnant women are warned from interacting with cats and litterboxes, because Toxo can wreak havoc on a babies’ developing brain.

Once it has taken up a comfortable residence in the host’s brain, Toxo waits to get back to a cat (usually by getting eaten). However, the parasite does not just wait patiently on the off-chance that its host will become cat food. Toxo jumps into the driver’s seat to control the behavior of its host. Now, the mind control begins.

As the main reservoir of Toxo in the wild is rodents (and they happen to be an extremely common lab model organism), most research on Toxo’s effects on the brain has been done on rats and mice. Compared to normal rodents, rodents infected with Toxo were more active, more likely to go out into the open (something most rodents are scared to do), and much more willing to try new foods they’d normally avoid [1],[4]. Even wild-caught rats with varying degrees of Toxo infection expressed these behavioral changes [5]. These animals might just have messed-up behavior because they’re now sharing their brain space with another organism, but researchers argue that these effects may actually serve the purpose to make the rats more likely to be eaten by cats.  Intuitively, this makes some sense. Toxo needs to get back to a cat to reproduce, so why not send its rodent host on a manic, active, fearless extravaganza, increasing its chance of getting caught and eaten?  Supporting this idea, other rodent parasites that don’t need a definitive cat host to reproduce  did not change the rodent’s behaviors in this way in experiments [1] – probably because unlike Toxo, they didn’t need to do in order to be transmitted.

Interestingly, Toxo doesn’t stop at the off-chance that cats will prefer daring and hyperactive rodents as prey. Toxo facilitates the predation process by making rats actually like cats. In a test of predator aversion in rats, Joanne Webster and colleagues exposed rats to four different cage settings and looked to see which space rats preferred to enter. One cage had their home bedding, one had brand new bedding sprayed with some fresh water, one had bedding sprayed with cat urine, and another sprayed with rabbit urine [1][6]. Normal rats avoided the cat urine, even if they had never met a cat in their whole lab-rat lives. However, Toxo-infected rats actually preferred the cages with cat pee, entering these cages more often than the other options! [6]

As someone who studies physiological mechanisms, I can’t help but ask how? How does this parasite has taken the reigns of rodent behavior? Luckily, the world-renown neurobiologist Robert Sapolsky was also intrigued by this question. In the late 2000’s, Sapolsky and his team began studying how Toxo affects mammalian brains.

First, these researchers needed to figure out what regions of the brain were being targeted, lending some insight into how Toxo hijacks behavior.  Looking at cysts in the brains of infected rats, Sapolsky and collaborators identified that Toxo targets the amygdala [7]. The amygdala is an important part of the brain for regulating emotion, social behaviors, and importantly, fear [7]. Next, they examined what changes Toxo was having in the amygdala. They compared the neural response of normal male rats to cat pee (scary) or the pee of a female rat (sexy). They found that the medial amygdala, a brain region associated with sexual arousal in rodents, lit up much more with female smells than cat smells, as expected. However, in Toxo-infected male rats, the smell of cats lit this arousal area up three times more than uninfected rats [8]. Essentially, female rats and cats are almost equally arousing to rats infected with Toxo! In order to facilitate its own reproduction, Toxo hijackes the rodent’s reproductive behavior [8].

Since Sapolsky’s fascinating findings, other researchers have taken the question one level deeper to understand how the parasite manipulates arousal. By sequencing Toxoplasma gondii’s genome, scientists discovered a gene for the enzyme that helps produce dopamine, the famous neurotransmitter involved in reward and arousal. To test whether this could be the mechanism, another research group infected rats with Toxo and examined dopamine release in the brain [9]. Their findings supported this: Toxo turned up dopamine production and dopamine neuron firing compared with uninfected rat brains [9]. Recent work shows how Toxo infection also changes gene expression in the amygdala of rats to create a less “fearful” phenotype [10]. These studies show how the parasite changes brain chemistry to make the normally-frightening cats arousing and exciting. So what about the crazy cat people? Do these rodent findings translate at all to humans? This has been a topic of scientific debate and controversy in the last decade.  Importantly, because humans are no longer prey for cats, any effects on our brains may be a by-product of our relatedness to other mammals, like rodents, but not intentional by the parasite. Still, findings in humans may illustrate how the mammalian reward and arousal system may be similar across animals. For example, one study tested 134 Czech individuals for antibodies to Toxo (a marker of infection) and asked them to “rate” the smell of different animal pees samples, including cats among others.  The participants did not know what animal they were smelling, nor did they know the results of their Toxo infection status. Infected men rated cat pee higher than all other animal pees, and rated it higher than non-infected men did, seemingly replicated the effects seen in rats [11]. However, there were many issues with this study. It has a small sample size, and further, individuals who had pet cats may have had both a higher likelihood of being exposed to Toxo while also become more tolerant of cat pee smell. However, this study is intriguing in that it tests the same behavioral changes in humans. Interestingly, a study on chimpanzees, our closest genetic relative, found that chimps infected with Toxo investigated leopard urine more than uninfected chimps as well [12].

Tempted by the idea of feline-philia and elevated dopamine levels, researchers have tried to link Toxo with mental health disorders in humans. For example, schizophrenics tend to have higher dopamine levels than typical individuals, and early studies in the 2000s showed an association where schizophrenics were likely to test positive for Toxo antibodies than the general population [13]. This finding captured the public’s attention (and you’ve probably heard of it too). However, it is important to not that the majority of schizophrenics do not have measurable Toxo antibodies [13]. Further, other large association studies struggled to replicate this finding, finding little to no associations between Toxo exposure and mental health issues [14][15].

In reality, our understanding of mental health disorders is still hazy at best, just as our knowledge of the effects of Toxo on humans. As Robert Sapolsky puts it, “this is a protozoan parasite that knows more about the neurobiology of anxiety and fear than 25,000 neuroscientists standing on each other’s shoulders”. That’s one reason to take notes from a mind-controlling microbe: we might discover something we have yet to learn about ourselves.

How Your Cat Is Making You Crazy | The Atlantic : Czech scientist Flegr, cited in this article and who has toxoplasmosis, discusses his interest and motivations for studying the parasite.