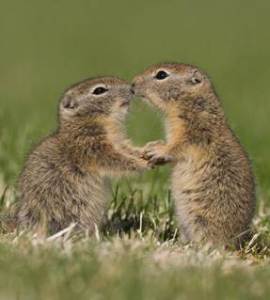 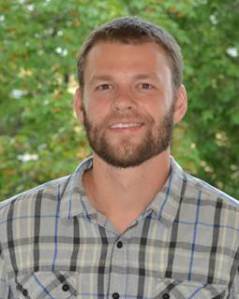 Dr. Andy Dosmann is a postdoctoral fellow at Stanford University, and he came to UC Davis this January to present a talk titled: “Personality, plasticity and intra-individual variability: Unraveling the complexities of animal behavior to better understand causes of variation (see link to view this talk below).” Dr. Dosmann studied the evolution of animal personality for his Ph.D. thesis at The University of Chicago. Using Belding’s ground squirrels as his study species, he researched links between behavior, condition, stress physiology, and immune function, including how natural selection operates on those traits to generate animal personality.  As a postdoctoral fellow at Stanford, his research addresses relationship between behavior and immunity in ants, with the aim of understanding the impact ants’ bacterial communities have on their behavior and immune responses. Additional research directions include assessing how behavioral traits fluctuate over time. The Ethogram had the opportunity to interview Dr. Dosmann and get his unique perspective on his work as a behavioral ecologist.

The Ethogram: When you were a kid, what did you want to be when you grew up?

AD: You know, pretty early on, maybe fourth or fifth grade, I decided I wanted to be a doctor. It seemed like the obvious choice

since I liked science. Although, even younger than that, I was transfixed by wildlife documentaries and read zoo books like Ranger Rick. I always had that interest and as I moved forward, I realized medicine wasn’t quite what I wanted and eventually I got into wildlife science and behavioral ecology.

ET: When did you decide that medicine might not be that path for you?

AD: It was actually during college. I initially declared pre-med, but as I got into it further, I realized I wanted to do something different and, in particular, something that would allow me to be outside. So, I went the biology route.

ET: Did you ever have anyone who inspired you along the way and pushed you towards that passion?

AD: Certainly there were some people who inspired me along the way, but I think after I made the decision to pursue evolutionary biology and behavioral ecology, I was trying to figure out what I’d like to do with myself and what job would overlap with both of those fields.

ET: So you study both ants and ground squirrels, correct? Do you have any fun field stories?

AD: Actually, even before studying those species and before getting into grad school, I had a number of other jobs. I studied capuchin monkeys for a little while, which was fun living out in the jungle in Suriname. Then for my dissertation, I initially had a project looking at behavioral ecology and conservation biology of African lions, which was awesome but an absolute failure! So I switched to ground squirrels, a more reasonable study species that you can actually get data on.

ET: What an experience though with the lions!

AD: Yeah, it was really neat. I spent 4 months over at a field site in Africa where there had been lions, but then some herdsmen moved in and we would spend 10 weeks at a time and not see a single lion. I realized I probably had a 30-year dissertation on my hands if I wanted to stick with it!

ET: Do you have a favorite species that you studied?

AD: You know, I’ve always had an affinity for coyotes. I worked in Yellowstone for a little while and I always thought they were interesting and clever animals. That was one thing that got me interested in the overlap between conservation and behavioral ecology. Historically with predator eradication campaigns wolves were totally obliterated, but coyotes have exploded. Seeing the differences in the ecology that determine those different responses to human disturbance was intriguing.

ET: Is there a current project that you are really excited about?

AD: The work that I am doing in ants right now I am really excited about. I’m really interested in how behavior varies over time and how some individuals or some colonies might be more predictable than others. When we look at the behavioral reaction to environmental change, we often look at what is occurring at that moment. Like in ants, temperature or humidity are really important, but their behavior might also be impacted by what happened the day or week before. I’m trying to figure out how to assess that and see if those dynamics account for consistent differences between colonies. I’m pretty excited about that as well as some work I’m doing with bacteria and ants and how that affects behavior and immunity. I think the current studies on microbiomes are absolutely amazing and they show that the impact, both positive and negative, that bacteria have may drive many aspects of animal biology, behavior, and physiology, so I’m excited to dig into some of those questions as well.

ET: Do you have a favorite part of this research you are doing right now?

AD: You know, I like all of it, but I have got to say I love being out in the field. That’s what drew me into being a behavioral ecologist and so I’m glad that I still get to do that. But I’m enjoying the lab work, as well.

ET: Do you have an advice for a young student who might be interested in science? Any advice about how they can pursue that?

AD: That’s a good question. I would suggest trying to get involved in extracurricular activities, like volunteering at a local field site or some sort of science club. There are definitely more opportunities outside of class time that are more inquiry based where you can explore different things that you might not get in class. If you really want to pursue biology, it is important to go outside the classroom.

ET: Is there a little-known fun fact about ants that you can tell us?

AD: One thing that blew my mind about Pogonomyrmex, one of the main species that I am studying, is that the queen ants can live up to 30 years!

ET: What about the other ants?

AD: They live a much shorter time, about a month or so and up to a year.

ET: Well thank you so much, Dr. Dosmann, it was a pleasure to talk with you!

Watch Dr. Dosmann’s talk on his research with harvester ants and ground squirrels:

Note: Formatting errors on the slide cast are the result of The Ethogram’s software, not Dr. Dosmann’s original slides.