‘What is a Solenodon?’ is a question that I have been asked by absolutely no one, ever. This is a shame because Solenodons are really cool animals that I think more people should be curious about! So here is some information about them.

Solenodons belong to a family (Solenodonidea) of mammals that is sort of related to shrews. This family has only one genus (Solenodon), and this genus has only two living species. Each species endamic to a particular island in the Caribbean. The Cuban Solenodon (Solenodon cubanus) is found on the island of Cuba, and the Haitian Solenodon (Solenodon paradoxus) is found on Hispaniola. Two other members of genus are only known from fossils that date from the Quaternary. How Solenodons are related to other mammals has not been fully resolved. 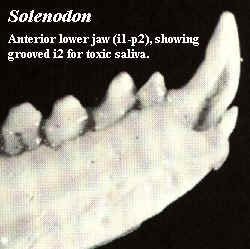 Solenodons are remarkable for several reasons. One big one is that they are one of the few types of venomous animal! The name Solenodon comes from the Greek meaning grooved tooth, and sure enough, Solenodons have grooves in the second incisors of their lower jaws. At the base of these grooves are modified salivary glands that secrete a neurotoxin similar to some venomous snakes. This can be a real problem for a potential predator because Solenodons have a very quick temper and fly into a biting screeching rage if they feel backed into a corner. Actually, having a venom delivery system like this was actually pretty common earlier in the evolutionary history of mammals. Several groups of fossil mammals have been found that share a very similar idea. Most have gone extinct, leaving the Solenodons as one of the few survivors. And, they have survived pretty well! Solenodons have remaned basicaaly unchanged for something like 76 million years making them an interesting example of stabilizing selection.

Solenodons spend much of their time foraging for invertebrates or sometimes fruit, nuts, or small vertebrates like lizards. They do so using their amazing noses. They push their long and flexible noses into the soil and smell for tasty morsels. This is actually one way that researchers attempt to find where Solenodons live. They look for small holes in the ground left by the noses of the animals. Solenodons have very small eyes and very poor eyesight, but they can smoothly navigate through their habitats using clicks and listening for how the clicks bounce off objects around them. This form of echo location is similar to, by independently evolved, that used by bats.

Solenodons are generally solitary animals except when they meet to breed. Breeding occurs at any time of year, but a given Solenodon will only have a maximum of two litters per year with each litter including one or two young. This low reproductive rate is one reason that both species are now endangered. Other reasons are habitat destruction and fragmentation, and Asian Mongoose that were introduced to the islands to eat rats and other pests but that now eat Solenodons as well.