Imagine you are a salamander. You are a small amphibian found in forests, ponds and/or streams. You probably have 4 legs and a long tail. You may be brightly colored with toxic skin. Got it? Good. 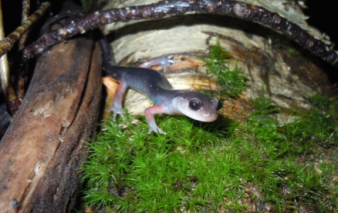 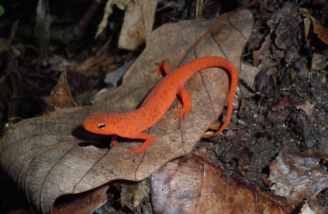 What are the things most important to you (as a salamander)? How do you spend your time? Your first thoughts were probably the same as for most animals; the important things are to find food, shelter, and a mate, while avoiding being eaten.  This is largely accurate for salamanders, with an added constraint. Above all, water is your life.  Being amphibians, salamanders must keep their thin skin from drying out.  About two thirds of all salamanders are lungless (in the family Plethodontidae). This group breathes entirely through their skin – a process facilitated by water. Many of these salamanders are also terrestrial, meaning water loss is the most important limit for activity (Feder, 1983). “Activity” in this context referring to the processes to attain first 3 factors we listed and movements to avoid water loss. 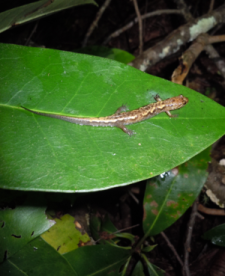 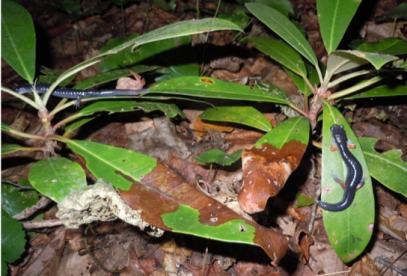 This seems counterintuitive considering being on a plant should make a salamander more exposed and increase their water loss (Jaeger, 1978). Yet many species are known to exhibit this behavior (McEntire, 2016). It has been suggested that food is more easily accessible on plants compared to the leaf litter (Jaeger, 1978) or that they climb to avoid predators (Roberts & Liebgold, 2008). However, neither of these theories have consistent support (McEntire, 2016) nor do they explain the high frequency of observed climbing.  So, what else might be going on?

Honestly, we don’t have a good answer yet, but individual-based models may help find the answer. Under certain conditions, climbing could lower their body temperature and lower rates of water loss (despite increased exposure). To explore this possibility in more detail, I created an Agent/Individual-Based Model (ABM/IBM). IBMs are simulation models that allow you to create a virtual world based on how you think the system operates, (in science speak, it is a way of creating and testing hypotheses) (Railsback and Grimm, 2012). IBMs include individual agents (frequently organisms) that can interact with each other and the environment. The model creator determines how these individuals interact; then patterns of the system emerge. If available, you can then compare your simulated results with field data to see if you have a good understanding of how the system works. Models are simplifications of the real world and no model is perfect, but they are useful tools.

My simulation resulted in increased climbing probability during the early spring and fall. In the field, we have observed increased climbing in the fall, however no climbing in the spring. This suggests temperature differences might be responsible for some of the observed climbing trends but that another process is likely involved as well.  By comparing the results of an IBM to field data, we can see if the mechanism we programed results in real patterns. If there is a mismatch, then some other process (than what was programed in) must be involved. IBMs are typically used with behavioral questions because you can include interactions between individuals. However, they can be useful to understand how individuals interact with their environment as well. For example, if a lizard is basking in the sun, and gets too warm it will move to a shady spot.

There are several other factors that could be explored with my model and it could be modified to explore other hypothesis. Another application of my model explores how climbing can moderate the impact of climate. This reflects the idea that animals are capable of interacting with their environment. Which is missing in most climate change models and may help organisms deal with such changes. However, the possibilities are endless.

Kira is a PhD student at the University of Georgia.  You can read more about her research here.