Nearly everyone knows about the kangaroos that inhabit the plains of Australia, hopping about and carrying infants, or ‘joeys’ in their pouches, but I would bet that not many know that there also exists an entire genus of forest-dwelling, tree-dependent kangaroos. These creatures are the arboreal counterparts to the terrestrial kangaroos we have come to know and love. Tree-kangaroos are marsupials of the genus Dendrolagus, and are found in the tropical rainforests of New Guinea, in far northeastern Queensland, Australia1.

The evolutionary history of these canopy cousins to kangaroos is a fascinating story. All Macropods—a group of marsupials including kangaroos and wallabies—evolved from opossum-like ancestors and descended from the trees millions of years ago. Interestingly, only tree-kangaroos evolved adaptations to return to arboreal life, and are now known as the largest tree-dwelling mammals in Australia2!

Throughout history, extreme alterations in climate and ecology influenced selective pressures on the tree-kangaroos’ ancestors to shift between terrestrial and arboreal habitats. The original kangaroo ancestor was potentially a terrestrial forest dweller1, but during the late Eocene the Australian continent underwent a period of drying, causing a reduction in forest habitats. Those ancestors were forced to live in drier, rockier conditions which required the transition into more of a generalist forager3,4. Due to their generalist nature, these newer ancestors successfully exploited the non-native introduced rainforests that developed in Australia from Asia during the mid-Miocene. Yet another round of global drying during the Pleistocene caused a second contraction of these rainforests, isolating the ancestral tree-kangaroo populations, and selecting for a shift back to an arboreal lifestyle5. These populations have given rise to the modern tree-kangaroos.

Today, there are 14 recognized species of tree-kangaroos distributed throughout their range, varying in size from 6 to 15 kg6. In contrast to terrestrial kangaroos, tree-kangaroos have evolved several adaptations to the arboreal lifestyle. These include longer and broader hind feet, longer curved nails, softer pads on their paws, and larger tails for enhanced balance.

Although they seem quite different morphologically from the terrestrial kangaroos, the similarities shine through when the tree-kangaroos come to the ground. When this occurs, the tree-kangaroo’s main mode of locomotion is through hopping, albeit not as gracefully as their terrestrial cousin due to their pendulous tail. Additionally, as is true with all kangaroos, tree-kangaroos do not sweat. Instead they lick their forearms and allow the evaporated moisture to cool them down, as a form of induced thermoregulation7.

Although not much is known about the reproduction of tree-kangaroos in the wild, some species appear to live in loose reproductive units of 3 to 5 adults, comprised of one male and several females7. Additionally, the offspring development period is one of the longest of all the marsupials. Young offspring can develop within the pouch on average in 250 days, with an additional 100-200 days of weaning afterwards9. Similar to other kangaroo species, tree-kangaroos only give birth to one joey per year. 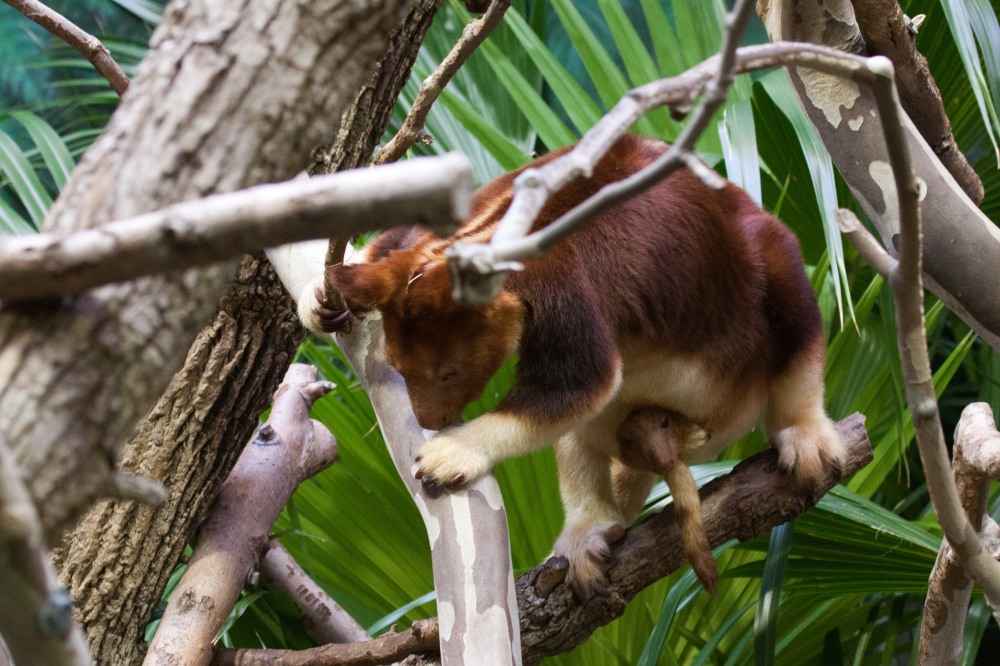 A female tree kangaroo with its young joey in its pouch [Source].

The main threats to tree-kangaroos are habitat loss and predation pressures. Given that their offspring have a long maturation time, these pressures can have considerable implications for sustaining populations in the long-term. Tree-kangaroo habitats are destroyed by logging activities, such as timber extraction, and are being replaced by coffee and rice plantations. Additionally, hunting by indigenous tribes as well as threats from the feral dog population have greatly contributed to the decline of these magnificent animals. Thankfully, organizations such as the World Wildlife Fund recognize the importance of species such as the tree-kangaroo, and collaborate with local wildlife trading networks to reduce illegal hunting and habitat loss in these affected areas of New Guinea and Australia.