In Northern California, turkeys are a common roadblock, daily hazard, and yearly Thanksgiving staple. However, people rarely take a second to stop and appreciate these animals’ interesting behavior.

There are actually two species of turkey, Meleagris gallopavo that ranges from Mexico to Canada and Meleagris ocellata that lives exclusively in the Yucatan Peninsula1. This creature feature will focus primarily on Meleagris gallopavo, our UC Davis resident species.

Turkeys have complex social structures, regardless of whether they live in the heart of a college town or in a less urbanized habitat. Turkeys maintain sex-specific dominance hierarchies: all the ladies form a hierarchy separate from the hierarchy of their male counterparts2. All turkeys have home ranges that overlap with the home ranges of many other individuals. However, turkeys do not actively defend territories. They live in male-female fission-fusion groups that change depending on the season3.

Adapted from Watts & Stokes (1971) The Social Order of Turkeys. The chart depicts sub-group fission and fusion dynamics over the course of one year in a population of M. g. intermedia (Rio Grande subspecies) in the Welder Refuge in Texas, U.S.A. Top row: males, bottom row: females [Source].

In the winter, females and juveniles are in family groups, while bachelor males hang out in male-only groups. As mating season begins in the late winter and spring, all groups come together and mix. Once they are done mating, females become elusive with the start of the nesting season. After a month of patient waiting on her nest, hidden in dense shrubbery, a female turkey hatches ten to twelve eggs. Her poults (baby turkeys) become more independent at two weeks old, when they’re able to fly into low trees to forage for food3. 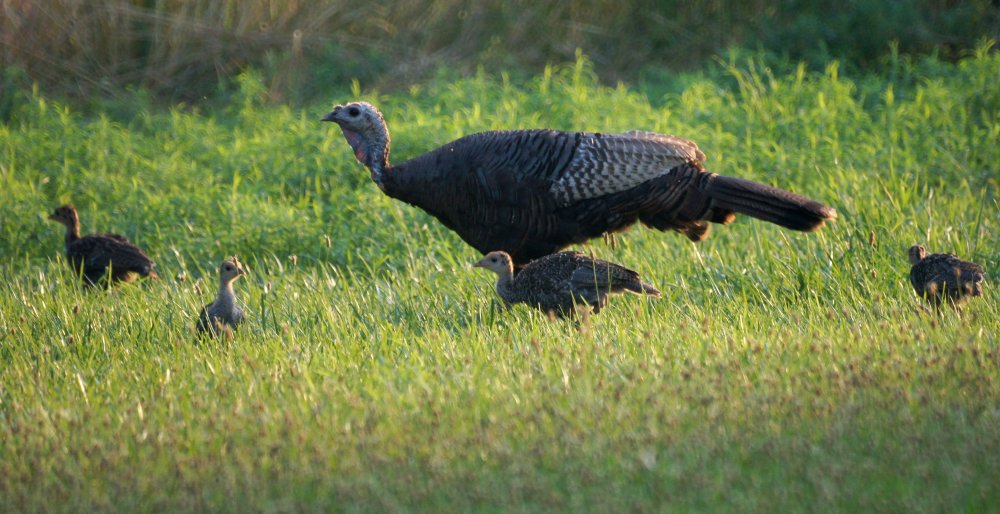 A mama turkey and her babies [Source].

In the fall, each group of siblings has established their family dominance hierarchy and joins fall flocks, groups of many families that congregate together in search of plant foods. Come late winter, all the groups mix with the bachelor male groups and, once again, the mating season begins3.

Turkeys often form large feeding flocks, and scratch through leaf litter when foraging. These flocks are composed of all adult males or all adult females during the non-mating season [Source].

Turkey mating is by far one of the most easily recognizable turkey behaviors. Male turkeys fan out their tail feathers and strut around female turkeys, not unlike the behavior displayed by a male peacock, or a male college student at the gym. What is especially unique is that male turkeys tend to display in pairs. What’s even cooler is that often these pairs of male turkeys are brothers4. Brother turkeys will strut and display together in an attempt to attract females. Both turkeys put in equal effort, but only one of the males gets to mate. By helping out his brother, the “helper” turkey is actually more likely to pass on his genes to the next turkey generation than if he were to try to attract females on his own4. This is an example of indirect fitness by way of Hamilton’s Rule5, which multiplies the relatedness of individuals (r) by the benefit the helper gains by helping a relative (B) compared to the cost of helping this relative (C). If rB>C, then this is a good strategy. In turkeys, the benefits of cooperative reproduction outweigh the costs of the helper turkey never actually mating.

Next time you happen to see turkeys on your drive to work, or get chased down the street on the way to your local coffee shop, take a second to appreciate their unique mating system instead of wishing that they end up on the dinner plate!